John "Jack" Renton was the head gardener at Essondale / Riverview he was responsible for a large portion of the plantings and layout on the site, that remain today. 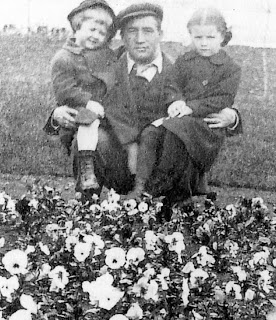 The picture is from the Riverview Museum, courtesy of Anna; he has both of his children in his arms ( I was told that they were both girls, but the one on the left appears to be a boy, and I have only been able to find records for two boys.)

Previous to Jack Renton was Edward Bence Stinchcombe, d. 9th of September 1929, Vancouver, 63yrs. b.  Gloucester, England. parents: Richard Stinchcombe and Emily Brooks
He  married Ruth Isabella Gamble, on October 9 ,1899 in New Westminster. She passed away on Oct 25, 1946, Vancouver, 83yrs., buried at Ocean View Cemetery, Burnaby, she was born on the 2nd of May 1863, Ireland. Parents: John Gamble and (Ann Jane Nixon?)

Ed was overseer of Grounds and Works from 1903,("Woodlands", New Westminster)  until several months prior to his death in 1929.  John "Jack" Renton replaced him.   Ed was responsible for most of the early plantings, grounds layout some of which still remain.

In May of 1904 John entered Kew Garden for training, previous to this he was working at St. Fagan's Castle, Glamorganshire.

John "Jack" Renton  left Kew Gardens in December of 1906, and was  in  B.C. in 1907.
The 1911 census listing for the family
In 1909 John is working and living at 1075 Harwood Street, Vancouver as a gardener for Samuel Gintzburger,(A),  a job he kept until 1919 when he was appointed supt. of the Provincial Nursery, Essondale [ Sources: Kew Guild ]
John Renton was born in Duns, Berwickshire, Scotland on the 4th of November 1882. He lived at 2245 Shaughnessy Street, Port Coquitlam after his retirement and was still living there at the time of his death on the 15th of August 1972, at the Royal Columbian Hospital, later he was buried at Burnaby Cemetery in the Masonic section. 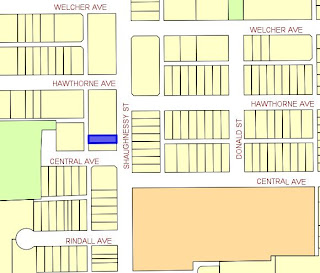 "Jack" retired in 1946, after 40 years in the gardening trade.
His parents were: John Renton and Elizabeth Shearlaw,(Shearlow)

Two sons:
(1)  John Alexander Renton, b. 21 October 1909, Vancouver.
d. on or about 18 September 1932, near Austin Avenue in Coquitlam, age 22. He died of a gunshot wound, unknown if the crime was ever solved. His death certificate

(2)  Maxwell Allison Renton,  b. 13th of June 1913 in Vancouver.
d. March 30, 1983 at the Royal Columbian Hospital, New Westminster at the age of 69.
He was a psychiatric nurse living at 916-Fifth Street, New Westminster leaving a wife;  Jean Evelyn Jeffs.  His death certificate.

Jack Renton, was the Superintendent of the Provincial Nursery, Essondale from 1919 to 1929, then he was appointed, Outside Overseer of Essondale from 1930-1947,  he resided at Essondale. After his retirement he lived in Port Coquitlam and became a PoCo councillor for a short while in the early 1950's.
I always hoped that there would be a nice picture of him in the PoCo city hall bureaucracy somewhere.  He was also mentioned in the newspapers a few times as being a judge at the various agricultural fairs.

He gave his Renton Peach plants away to people in the area on special occasions  marriages,etc.,,. The present day Riverview Hospital grounds owe a lot to his plantings; most of the earlier plantings previous to Jack Renton's are long disappeared.

I understood that John and Emily had at least one daughter, possibly two. I can find no records of them at this time though.

There is a leaf curl resistant cultivar in moist mild coastal British Columbia called "Renton" In the 1980's it was sold by the David Hunter Garden Centres around Vancouver. They did not ship it though.
Brooks and Olmo (Register of Fruit and Nut Varieties 3rd edition, 1997) lists it as follows:
Renton -
Originated in Coquitlam, B.C., Canada by Jack Renton. Introduced in 1940.
Parentage unknown; discovered in 1926. Fruit: flesh yellow, semi-freestone; resembles Howard Fisher. Tree: more resistant to leaf curl than are other varieties.
Should possibly be available in B.C. and North Western states collections. 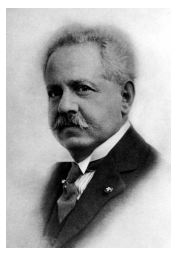 Always seen with an orchid in his buttonhole, was one of the most prominent members of the early Vancouver Jewish Community. He and his charming wife Rosina, lived in a large estate at 1075 Harwood Street overlooking English Bay. President of S. Gintzburger Ltd., "Real Estate, Insurance and Financial Agents", West Vancouver councillor (1912-3), Swiss consul,(1913-) for B.C. and Alberta. His brother Maurice, was also involved in real estate, mining, speculation,etc.,

Maurice Gintzburger,(1867-1922) who was Samuel's brother, married in 1898, (marr. cert.) Henrietta Robinson,(1874-1948, d. cert.) sister of Rosina Robinson.
The Robinson sisters parents were, Louis Robinson and Amelia "Minnie" Marcuse.
The Gintzburger's brothers parents were, Nephtali Gintzburger and Pauline Nordmau
Many of them are buried at Mountain View Cemetery, Vancouver.
Henrietta was living at 1075 Harwood at the time of her death, not long after this the property appears to have been redeveloped, and Jack Renton's, ten years of work was probably destroyed in the process.

Posted by niftyniall at 6:22 AM